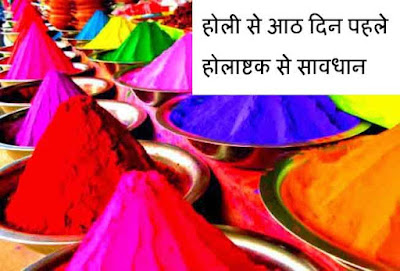 Holashtak begins on the Phalgun Shukla Ashtami (eighth day during the waxing phase of moon in Falgun month) and ends on the Phalgun Purnima day (full moon day) according to the North Indian Hindu Calender. The Purnima day is celebrated as Holika Dahan in different regions. In Holashtak, some people decorate the branch of a tree with colorful pieces of clothes. Everyone ties a piece of cloth and that is buried underground.

During the eight days of Holashtak, Moon on the eighth day, Sun on the ninth day, Saturn on the tenth day, Venus on the eleventh day, Jupiter on the twelfth day, Mercury on thirteenth day, Mars on fourteenth day and Rahu on the Purnima day take a nrgative transformation. That is why all the auspicious tasks should not be done during this period. In pilgrimage sites such as Shatrudra, Vipasha, Iravati and Pushkar are considered not affected by the negative effects of Holashtak.

As generally, Holashtak period is considered inauspicious for all and the world but for tantra sadhaks consider it as auspicious period and perform special puja.