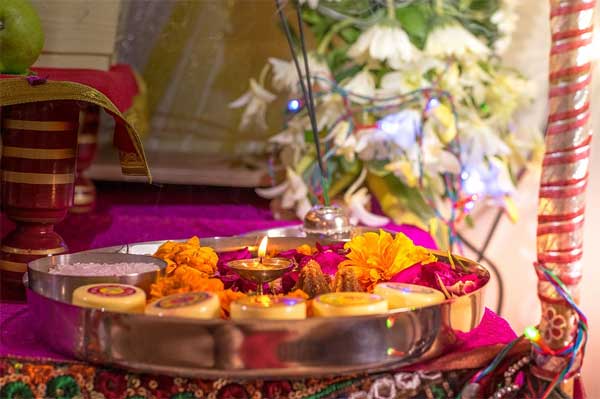 Amavasya Tithi Shraddha or Sarva Pitru Amavasya Shradha also known as Sarva Pitru Moksha Amavasya is done for those family members who died on Amavasya Tithi, Purnima Tithi and Chaturdashi Tithi. If someone is not able to perform Shraddha on all Tithis for any of the family member died then single Shraddha for all died family members can be done on this day. Doing Sankalp and offering Shraadh food to Brahmin for the Pitr's or ancestors that have passed is sufficient to please all died members in the family. Also, Sarva Pitru Amavasya or Mahalaya day can also be used to do Shraddha for any of the died family member whose death anniversary or the tithi of death is not known or forgotten and this is the reason Amavasya Shraddha is also known as Sarvapitra Moksha Amavasya. Shraddha of family members who died on Purnima Tithi is also done on Amavasya Shraddha Tithi or Mahalaya and not on Bhadrapada Purnima. Bhadrapada Purnima Shraddha falls one day before Pitru Paksha but it is not part of Pitru Paksha. Pitru Paksha starts on the next day of Bhadrapada Purnima Shraddha.

Amavasya Shraddha is also called by the name Amavas Shraddha. Mahalaya Amavasya begins the Navratri festival in West Bengal. It is believed that Goddess Durga came on the Earth on this very day.
Pitru Paksha Shraddhas must be done on the tithi as told by a Brahmin or on the last day i.e Amavasya day. The auspicious time to perform Shraadh is either Kutup Muhurat and Rohina muhurat. till Aparahna Kala gets over. Tarpan is performed at the end of the Shraddha.

What is Sarva Pitru Amavasya?

The Pitru Paksha period that extends over sixteen days from the Purnima to Amavasya after the month of Bhadrapada (August – September) dedicated for performing the shradh ceremonies of the died ancestors. The shradh of the ancestors died is being performed on the tithis they died irrespective of whether the death occurred in the Krishna Paksha or Shukla Paksha. The Pitru Paksha shradh special significance is highlighted in various shastras in Hinduism. If you do the Shraadh ceremony of the your deceased ancestors with utter devotion, love and respect for the died member, you not only get blessings of the ancestors but also get immense benefits as the ancestors visit their descendants on the earth during this period to receive the offerings given to them through shradh and tarpan. It is our number one duty for performing the Pitru Paksha shradh of the deceased members of the family and it must be performed.

What is to be done on Sarva Pitru Amavasya?