When Panchami Tithi concludes or Sashti Tithi begins between sunrise and sunset then both Panchami and shashti are united then this day is observed as Skanda Sashti Vratam. Dharmasindhu and Nirnayasindhu scriptures have this rule written. Popular Murgun temple - Sri Subrahmanya Swami Devasthanam in Tiruchendur, follows this rule along with other Murugan temples in Tamil Nadu and Soorasamharam day is observed one day before Sashti Tithi if on previous day shashti Tithi is combined with Panchami Tithi.

The Tiruppugal, one of the famous religious book in Tamil, contains the devotional songs of Arunagirinathar in praise of Lord Subramanya. Hymns from Kavadichindu and the Skanda Sashti Kavacham are also sung on this day by Skanda devotees. 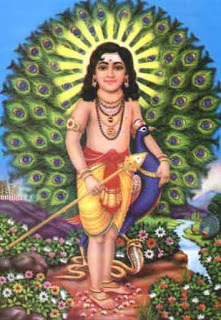 People observe six days fasting starting from first day or Pirathamai of Karthika lunar month and concludes on the sixth day known as Soorasamharam day during the Skanda Shashti fasting. Soorasamharam is the final and most significant day during the six days festival as it is considered that Lord Murugan killed Demon Surapadman on this day and thus Soorasamharam festival is observed year after year to mark the victory of good over evil.

All Sashti(s) tithi's are dedicated to Lord Murugan or Skanda but Shukla Paksha Sashti that comes in lunar month Kartika (which is during Solar month Aippasi or Karthikai) is the most important. Murugun devotees fast six days which lasts on Soorasamharam day. Tiru Kalyanam is the next day after Soorasamharam. Next Skanda Sashti after Soorasamharam is called as Subramanya Sashti also known as Kukke Subramanya Sashti occuring in the lunar month Margashirsha.


Some basic rules are observed while doing the Skanda Shasti fasting:

The undermentioned six temples which are known as Arupadaiveedu, are the most important shrines for Murugan devotees in Tamilnadu, India: