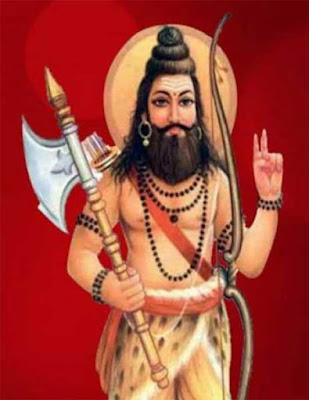 Parashurama is the sixth avataar of Sri Vishnu. Lord Parshuram is the sixth avatar of Lord Vishnu. The legend of Parshuram goes back to the Treta Yuga. Parashu means axe and Rama is Lord Sri Rama in Sanskrit language. Literally the name means Rama-with-the-axe. Parshuram was born to Sage Jamadagni and Renuka.

Of all the 9 Vishnu's avataar that had taken place, Parashurama is believed to be still living on earth at this time as per Hindu beliefs. That is why Parashurama is not worshipped as compared to Sri Ram and Sri Krishna. Parashurama temple exists at the holy place Pajaka near Udupi, in South India. There are several temples at the western coast of India dedicated to Lord Parashurama.
As per Kalki Purana, Parashurama will be the martial guru of Shri Kalki, the 10th and final Avatar of Lord Vishnu. Lord Vishnu's 6th avataar meeting another avatar is not new. Parashurama came to the ceremony of Sita Swayamvar when Lord Rama broke the Shiva's bow and there he met the 7th Avatar of Lord Vishnu.

There was a region in central India, Mahishmati Nagri, which was ruled by the demon king Kiratarjuna and his kingdom of the Kshatriyas.

Goddess Earth was so burdened by the evil deeds of the king, and asked Lord Vishnu for help. Lord Vishnu said the he would be born as a son to Renuka and Sage Jamadagni and destroy the Kiratarjuna's kingdom and the Kshatriyas. Vishnu reincarnated as the great warrior Parshurama and defeated the king and the Kshatriyas, restoring peace on earth.
This is a special day for Hindus which holds a lot of religious significance. Devotees fast from the night before to the day of Parshuram Jayanti. People visit temples and worship to Lord Vishnu for his blessings. Donating food to Brahmans is considered very auspicious on this day of Parshurama Jayanti.