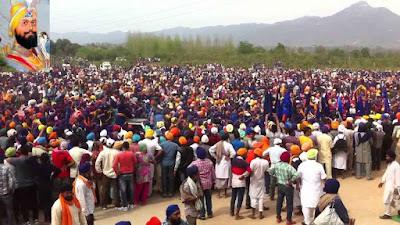 Hola Mohalla is the second most important festival of Sikhs. It falls in the month of March after a day of Holi festival of Hindus. On this day, in accordance with traditions established by Guru Gobind Singh, the Sikhs demonstrate their valor and fighting skills through mock battles. They take out huge processions and these processions visit the various Gurdwaras.


Guru Gobind Singh is the tenth guru of the Sikhs and some believe that he started this festival after being inspired by the Hindu festival of Holi. Still others believe that Guru Gobind Singh, after establishing the Khalsa army, was encouraged to start this new tradition when he saw demos of mock battles being carried out at the Holgarh fort. This event dates back to the time when the Sikhs were defending themselves against the Mughal regime. The tradition originated in the small town of Anandpur Sahib and later on spread to other towns and cities and is now celebrated all over the world. We have given here Hola Mohalla Anandpur Sahib video.


A special group of Sikhs called Nihang Singhs is considered as very important members of this tradition. They now shoulder the responsibility to carrying forth the tradition of Holla Mohalla and are believed to be the descendants of the tenth Guru. They are known especially for their ardent fighting spirits, their valor, and superior military skills. Their special skills in horse riding and also performing thrilling stunts and skilled archery along with fencing and other martial arts make them unique and widely popular across communities. Turbans, shimmering bright blue dresses, majestic swords, long spears, thick moustaches, and expert horse riding are the distinctive traits of this classy Sikh community.


Holla Mohalla celebrations span for three long days. Not only simulated battles and display of weaponry but also solemn recitation of religious discourses and sweet singing of religious songs form an integral part of the celebrations. Apart from this, various other types of cultural activities are also performed. Music, songs, dances, poetry recitation, all form a part of the celebration. Thousands of people from far off places throng the streets and gurdwaras of Anandpur Sahib on this auspicious day.

Langars or community services form another major aspect of Holla Mohalla celebrations. Here free meals are distributed to one and all. Pious Sikhs donate large amounts of rice, dal, vegetables, milk and other ingredients needed to cook these meals. People also volunteer to cook the food and serve food and wash utensils.