Thrissur Pooram 2020 Alert : This time due to COVID-19 pandemic and the lockdown in the Country, Thrissur Pooram, the biggest temple festival in Kerala has been cancelled for the first time in 58 years. Thrissur pooram 2020 was scheduled to be held on May 3 but as the lockdown is in place, both Paramekkavu and Thiruvambadi devaswom boards jointly decided to cancel the festival and thus only the necessary rituals would be done. Pooram exhibition, which starts on April 1 and ends in the last week of May, has already been cancelled. In history, one can remember the time in 1962 due to the Indo-China war, the 200-year-old festival Thrissur Pooram was held as a ritual only event. 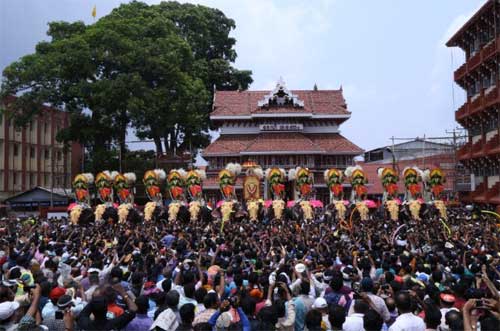 Malayalam festival Thrissur Pooram is celebrated  in the Malayalam month of medam (April-May) every year in the vicinity of Vadakkunnathan Temple at the Thekkinkadu Maidanam in Thrissur. The largest and most popular of all Poorams, Thrissur Pooram is observed on Pooram day, when the moon rises with the Pooram star in the month of Medam.  Thrissur pooram, marks Kerala's cultural diversity, in which the huge gathering witness the Paramekkavu and Thiruvambadi teams competing each other through elephant procession, fireworks, and stunning cultural representation. Various temples in and around Thrissur are invited with their deities to city of Thrissur to pay respect to Lord Vadakkunnathan, the main lord of the Vadakkunnathan Temple. A huge procession is organized at temple premises along with the music of Chenda Melam and Pancha Vadyam. The spectacular event, attended by thousands of people, take place in front of the Vadakkunnathan temple in the city and one can see over 50 elephants decorated with various golden ornaments. A grand assembly of Gods and Goddesses in and around Thrissur make their visit to the Vadakumnathan Temple premises on caparisoned elephants accompanied by grand ensembles of Chenda melam and pancha vadyam.

Elephants can be seen colorfully decorated and wearing gold oranments marked by the kudamattom ceremony which is one of the great highlights watched by people.

Next one can witness the ilanjithara melam which is a performance of traditional instruments which enthralls the gathered audience to a state of euphoria and bliss. Around 250 artistes participate in the traditional orchestra led by chenda artistes and the spirit of thousands of spectators wave their hands in accordance to the rhythm generated by the chenda, kurumkuzhal, kombu and elathalam (the traditional instruments of Kerala). Finally a grand fireworks are displayed.


How to reach and celebrate Thrissur Pooram?