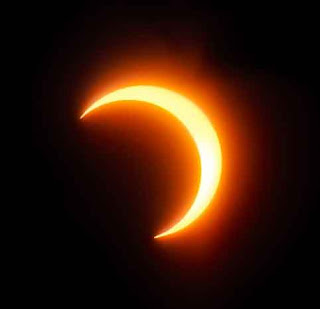 Surya Grahan in March 2016 in India – Suryagrahan Time – Solar Eclipse March 9, 2016 in India
Surya Grahan or Solar Eclipse, is on March 9, 2016 in India and other countries of the world. The Surya Grahan or Solar eclipse is a total solar eclipse in other parts of the world but only partial in India, visible in the early hours of morning. Solar eclipse on 9th March 2016 is visible in eastern parts of Asia and Australia, Palau, Singapore, Thailand, Malaysia, Indonesia, Taiwan, Japan, China, Myanmar, Sri lanka, Indian ocean & North Pacific ocean, India, South Korea, Guinea. The total time of the Solar Eclipse is from 4:49 AM to 10:04 AM and around 30 minutes of visibility in India.

Pregnant women should not worry about this solar eclipse. Its better to stay at home if you have some doubts and chant the mantra's dedicated to Sri Krishna like Santaan Gopala Mantra.

If you take a holy dip on the Surya grahan day in holy rivers, it is considered as highly auspicious. Some people also fast on the day of solar eclipse. Do not forget to chant mantra's dedicated to Vishnu God like, "Om Namo Bhagvate Vasudevaye" and Surya Mantra, Gayatri Mantra, Mrityunjay Mantra, etc.

The next Surya Grahan or Solar Eclipse is gong to take place on September 1, 2016 which will not be visible in India and would be visible in Africa, South Pole, Madagascar, Yemen, Saudi Arabia, Malaysia, Mozambique, Geban. There will be two lunar eclipses or Chandra Grahan as well in this year.

Surya Grahan Sutak is considered an inauspicious period when it is considered not to undertake any auspicious task as it may lead to failure. In the Sutak period, do not
Eat or cook food, Urinate, Defecate, Sexual intercourse, make up, any auspicious task, look in sky with the naked eye. In sutak period, prefer doing meditation. One should not touch the idols of gods/goddesses and Tulsi plant during this sutak time and "Ganga Jal" should be sprinkled all over the home.