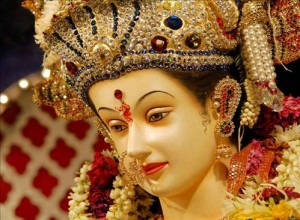 Magh Navratri, also known as Gupt Navaratri (गुप्त नवरात्रि), comes in the Shukla Paksha of Magha month i.e January – February. Magh Navratri starts on January 18 and ends on January 26 in the year 2018. Magh Navratri is dedicated to the nine forms of Shakti Goddess. Many people observe fast on the days of Magh Navratri and only vegetarian food is eaten during this period.

Gupt Navratri is also observed during the month of Ashada (June – July). The most popular Navratri comes twice a year - Chaitra Navratri (March-April) and Sharad Navratri (September – October). Check Dates of Navratri and Navratri Calendar 2018 along with Navratri 2018 Colours.

Navratri festival is considered as the best time to worship mother Goddess Durga. During Navratri, the "sadhak" or the worshipper performs special worship of the mother goddess to attain powers or learn tantra saadhana . Nine days of Navratri falling in the months of Ashadh and Maagh shukla paksh or the bright fortnight are called the Gupt Navratri. The observance of Gupt Navratri is not known to everybody.

Persons who worship Durga reads and listens to Durga Chalisa,  Shri Durgasaptshati paath, Shriamd-devi Bhawad, Devi Mahaatmaya to get the blessings of Maa Durga. The Navaran Mantra which is regarded as very powerful is recited in front of Goddess Durga idol or picture. This is the Navaran Mantra - “Om Aim Hreem kleem chaamundaayai vichche”

As per Devi Bhagwat, as Navratri comes 4 times a year and like the way nine forms of Maa Durga are worshipped in the Navratri, likewise in the Gupt Navratri, "dus mahavidya" or the 10 Mahavidya Devis are worshipped. Gupt Navratri are special to persons who perform tantra rituals, those associated with Mahakala and for those who wish to attain spiritual strength. The Goddess Bhagwati seeker fast and worship Devi Maa with very strict rules. People try to achieve rare spiritual powers after a long period of meditation.

In the Durga Saptashati, Goddess Durga herself tells us that one who does worship her with utter trust, faith and devotion in the nine days of Navratri, he or she gets free from all difficulties and gets health, wealth, prosperity and children.

As per Ramayana, in this Magh month's nine days of Gupt Navratri, Sri Ram along with Goddess Sita sat and performed "Shakti puja" or "Goddess worship" near the banks of river "Saryu" in Ayodhya

Also, Pandavas in the epic Mahabharata performed the "Shakti puja" or "Goddess worship" in these nine days of Magh month Gupt Navratri as told by Sri Krishna to get victory in the battle against the Kauravas.