Ganga is the holiest river worshipped as a Goddess in Hinduism. The river we all love is referred as Ganga Maiya or Mother/ Goddess Ganga by millions of people. Ganga Saptami, also called by the names of Ganga Jayanti or Ganga Pujan, is an auspicious day which celebrates the rebirth of Goddess Ganga on Earth. Ganga Saptami is observed on the Saptami (7th day) of the Shukla Paksha (the waxing phase of moon) during the month of ‘Vaishakha’ or Baisakh. 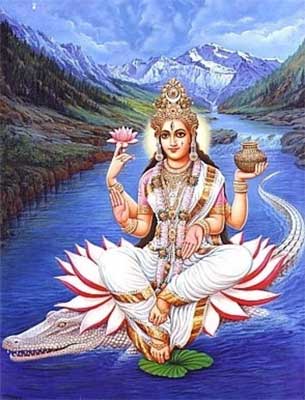 Religious scriptures like ‘Padma Purana,’ ‘Brahma Purana’ and ‘Narada Purana.’mentions the significance of Ganga Saptami. Goddess Ganga first descended to the Earth on Ganga Dussehra day as per Hindu scriptures. Lord Shiva took Ganga (which was about to enter Earth) in His hairs to break Ganga's descent so that Ganga could not sweep away the whole Earth. Afterwards, Lord Shiva released Ganga so that she can wash away the sins of the cursed souls of Bhagiratha's ancestors. As Ganga was on her way to Bhagiratha's kingdom, her mighty flow destroyed sage Jahnu's Ashram. Sage Jahnu got angered and he drank up all of Ganga's water. After this, Bhagiratha and the Gods prayed to Rishi Jahnu to release Ganga. Jahnu released Ganga from his ear after he was pleased with Bhagiratha's and Gods prayers. On Vaishakha Shukla Paksha saptami day, Jahnu Rishi released Ganga from his ear. That is why this day of Ganga Saptami is also known as Jahnu Saptami. Ganga came to be known as Jahnavi, the daughter of Rishi Jahnu. Taking bath in Ganga river or pouring a few drops of Ganga water in your bucket and bathing on Ganga Saptami day is considered highly auspicious. People worship Goddess Ganga and take bath in Ganges on Ganga Saptami day. It is believed that bathing in the water of Ganga on this day washes a person's sins. In Hinduism, when a person is dead, his remains like bones and ashes are immersed in the holy Ganga river as it is believed that it will give salvation or 'moksha' to the dead person.

People wake up before sunrise and take a dip in Ganga river on the day of Ganga Saptami. ‘Ganga Aarti’ is performed by the priests along the ‘ghats’ of Ganga and thousands of people gather to witness this majestic devotional ritual. When Maa Ganga's Aarti is over, people hover their hands over the flame to seek purification and blessing. The aarti thali has small diyas and flowers which are later floated down the river. People also do deepdan on Ganga Saptami day. A Ganga devotee must hear or recite Ganga Sahasranam Strotram and ‘Gayatri Mantra’ to seek Maa Ganga's blessings. Devotees offer special prayers at sacred pilgrimage places like "Har ki Paudi" in Haridwar, Triveni Sangam in Prayagraj and Rishikesh in Uttrakhand. Goddess Ganga must be worshipped on Ganga Saptami day by people who are under the influence of ‘Mangal’.