Vaishakha month Purnima tithi is celebrated as birth anniversary of Gautama Buddha known as Buddha Purnima which is also known by the names such as Buddha Jayanti, Vesak, Vaishaka and Buddha's Birthday.Siddhartha Gautama who was later known as Gautama Buddha founded Buddhism. 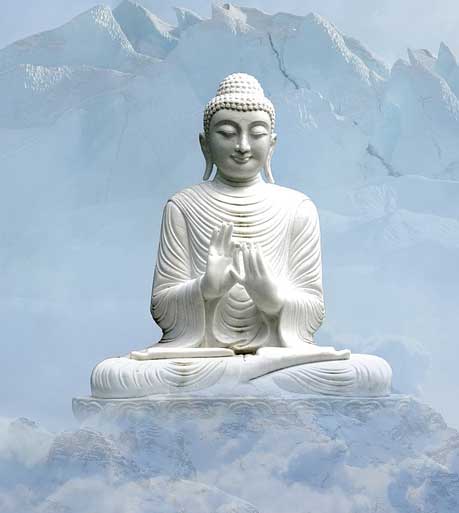 Gautam Buddha was born as Siddhartha Gautama to King Suddhodana and lived life in great luxury. At his birth there were predictions that the prince would become a great monarch one day, he was isolated from the outside world so that he wouldn’t get influenced in living a religious life. Gautam became prince and one day at the age of 29 he decided to see the outside world and soon left off the palace grounds in his chariot. On his way towards the journey, he saw an old man, a sick man, and a corpse. As Siddhartha was kept away and he did not know the miseries of aging, sickness, and death he asked his charioteer to explain about it. Just he was about to reach the Palace, he saw a monk and really liked his peaceful attitude. Thus he decided to go into the world to know exactly how the man could be so calm and composed despite such sufferings all around him. He left the palace and became an ascetic. He reached the peak of of mystical realization but as he was  not satisfied, he went out in search of nirvana, the highest level of enlightenment. He sat under a banyan tree and seeked to attain enlightenment. As he attained enlightenment, he preached about it and later founded Buddhism.

The important pilgrimage sites for Buddhists are Bodh Gaya, Kushinagar, Lumbini, and Sarnath of which Bodh Gaya is the most important pilgrimage site related to the life of Gautama Buddha. Gautama Buddha obtained Enlightenment at Bodhagaya and Sarnath is the place where he first taught the Dharma to five monks. The Mahabodhi temple at Bodhgaya is decorated with colorful flags and flowers and special prayers are organized under the Bodhi Tree where Lord Buddha attained enlightenment. Gautama Buddha obtained Enlightenment on the day of Buddha Purnima.
As per North Indians, Buddha is believed as the 9th incarnation of Lord Vishnu. However, Buddha is never regarded as an Avatar of Vishnu as per South Indian system. Balarama is considered as the 8th incarnation and Krishna as the 9th incarnation of Lord Vishnu as per South Indian system. Most of Vaishnavaites consider Balarama as an incarnation of Vishnu. But Buddhists do not consider Buddha as an incarnation of Lord Vishnu. Gautama Buddha's birth and death time is unsure. But most historians consider his lifetime between 563-483 B.C. Buddha died at the age of 80 at Kushinagar, Uttar Pradesh.

On the day of Buddha Purnima, Buddhists visit temples and recite verses in appreciation of Gautam Buddha and listen to monks over Buddha's teachings . A small statue of Buddha as a baby is placed in a basin filled with water and decorated with flowers where people coming in pour water over the statue which symbolizes a new beginning. Devotees offer prayers and wear white clothes and distribute kheer (a legend says that a woman named Sujata had offered Gautama Buddha a bowl of milk porridge on this day). Celebrations take place in Buddhist sites across India, especially at Bodhgaya and Sarnath and Kushinagar where large fairs are organised and Buddha statues are taken out in public procession. And Buddhist regions like Sikkim, Ladakh, Arunachal Pradesh, and north Bengal (Kalimpong, Darjeeling, and Kurseong). Buddha Purnima is celebrated as Saga Dawa in Sikkim. Monks carries the holy book from Tsuklakhang Palace Monastery as a public procession around town. Blowing of horns, beating of drums, and burning of incense along with dance performances are a few traditions. Dharma wheel symbol also known as dharmachakra is seen on Vesak day or the day of Buddha Purnima. The dharma wheel has eight ribs. Gautam Buddha's great teachings are represented through this wheel.

People provide food to organizations helping the needy and poor, elderly and sick. Caged animals are bought and set free for showing affection and care for all living creatures, as said by Buddha. Pure white clothes are weared mostly. Non-vegetarian food is strictly avoided on this day.

There is also a train named Budhpurnima Express named after Buddha Purnima. The Budhpurnima Express is an express train of East central Railway zone of Indian Railways which operates between Rajgir and Varanasi in India. It runs between major "Buddhist Hubs" such as Rajgir, Nalanda, Patna, Gaya, Varanasi, Sarnath cities in Bihar and Uttar Pradesh.

It is celebrated as Vesak in South and Southeast Asia, which places greater emphasis on the enlightenment and death of the Buddha. As per Theravada Tripitaka scriptures, Gautama was born c. 563–480 BCE in Lumbini in modern-day Nepal, and raised in the Shakya capital of Kapilavastu ,Nepal. The day to celebrate Vesak as the Buddha's birthday was shaped at the first conference of the World Fellowship of Buddhists held at Colombo, Sri Lanka, in May, 1950.

Just one thing to note here is that Vesak is not the same as Vaisakhi festival.