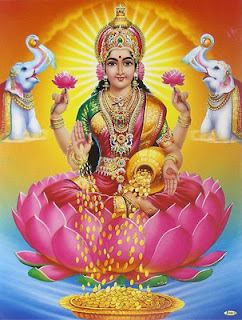 Maa Laskhmi is known as the Goddess of Wealth and Prosperity therefore worship and pray to Maa Lakshmi on this day with utmost devotion can get the blessings of Mata and if you are facing any financial problems in your life, that will soon go away.


Lakshmi is the Goddess of wealth, prosperity, and fortune. She also offers material and spiritual growth. She protects her devotees from misery and money-crisis.

Goddess Lakshmi is married to Lord Vishnu. The word "Shri" itself means "Lakshmi". According to Vishnu Purana, Lakshmi is the daughter of Maharishi Bhrigu and Khyaati and later reborn during the churning of ocean. She is the sister of the Guru Sukracharya(who is known as the Guru of the Daanavaas) as well as Moon. She lives with Lord Vishnu in "ksheera Sagara" as per the curse of sage Durvasa. When the Devas and Daanavaas churned the ksheera Sagara (ocean of milk), Chandra and Lakshmi were born out of the sea. Lakshmi is Lord Vishnu's spiritual feminine energy. Regarded as the goddess of beauty, She has a golden complexion with wavy and long hair, representing happiness. Her red golden costume, gold ornaments with a golden crown represents fulfilment.