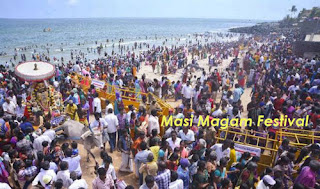 Celebrated in Tamil month Masi during Makam Nakshatra, Masi Magam, also known as Maasi Makam, is a very auspicious Tamil Hindu festival celebrated by Tamil speaking people. Here we have told importance of masi magam and what to do on masi magam.

Lord Shiva, Shakti, and Lord Vishnu idols in a procession are taken to sea shores of 'Theerthavari' or Bay of Bengal, pond or lake for bathing on Masi Magam day Nadhaswaram, a South Indian instrument is also used in the procession. Devotees who comes in the procession take dips in the water for removal of their sins. Masi Magam is observed in India and also in Singapore, Thailand and Indonesia.

Tamilians in the whole world celebrate this auspicious festival. Magam, is one of the twenty seven stars (Nakshatras) in the Hindu astrological system and it is considered as one of the most favorable times for spiritual purification.Masi Magam day is one of the most powerful full moon of the year,as the moon aligns with Magha Nakshatra which is regarded as the birth Star of the Kings and Ancestors. It has been seen that Makam Nakshatra prevails during Pournami or full moon day though it is not always the case. Masi Makam observation is linked with Magha Nakshatra and not full moon day. Makam Nakshatra is also known as Magam and Magha.

The day of Masi Magam not only provides prosperity associated with the Full Moon but also the great quality of the Magha star,giving a unique opportunity to gain power and energy. Masi Magam is a significant day to leave our ego and surrender at the divine's feet.

Thousands of people participate in the auspicious Poojas and rituals on the Masi Magam day. Gaja-pooja(elephant worship) and Ahwa pooja(horse worship) are performed by some temples to bring happiness and fortune to the devotees. The festival is of immense importance in Tamil Nadu, Kerala, Puducherry or Pondicherry, Kumbakonam, Srirangam and in various other temples associated with Lord Vishnu, Shiva and Shakti in South India. A dip in the seas or rivers on the Masi Magam day is considered to attain Salvation or Moksha. Masi Magam has a special significance after twelve years, and then it is known as Maha Maham. Maha Maham is of great importance at the Adi Kumbeswaran temple in Kumbakonam which has a sacred tank called Maha Maham.


King Vallala of Tiruvannamalai,was a great devotee of Lord Shiva. Lord Shiva once came as a child in front of him. As the King had no child, Lord Shiva promised to perform the King's last rituals. On Masi Magam day, the king died and as promised by Shiva, he came to perform his last rites.

Lord Shiva also blessed the king by saying that whoever takes a bath in the sea during Masi Magam will definitely get "Moksha.". It is believed that every year Lord Shiva visits the sea to perform the last rites of king Vallala.