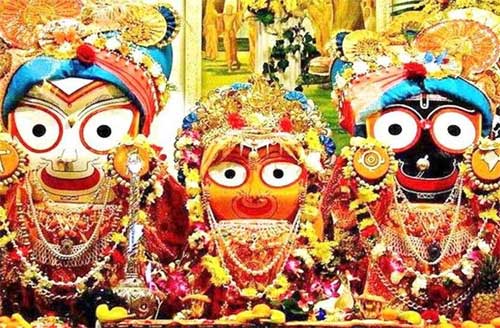 Ratha Yatra is a huge Hindu festival celebrated each year at world famous Jagannatha temple in Puri, Odisha, India. Ratha Yatra day falls in month of June or July and is fixed on Dwitiya Tithi during Shukla Paksha of Ashada month. Lord Jagannatha worshipped in the city of Puri at Jagannatha temple is believed a form of Lord Vishnu revered by the followers of Vaishnavism. The word "Jagannatha" literally means Lord of the Universe. Jagannatha temple at Puri is one of the place among the Char Dham Hindu pilgrimage destinations that a Hindu must visit in their lifetime. Among the four most sacred temples in India, Rameshwaram is located in south, Dwarika in west, Badrinath in north along with Jagannatha Puri in East. Rath Yatra is also known as Jagannath Puri Rath Yatra. 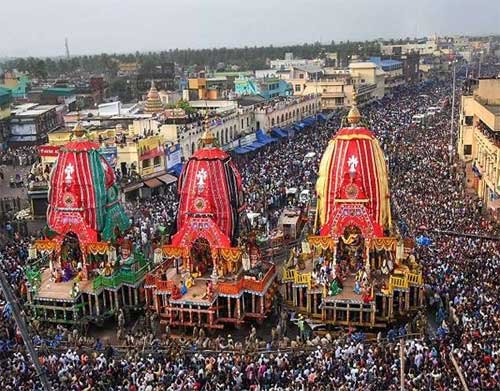 Ratha Jatra or Ratha Yatra is the Festival of Chariots of Lord Jagannatha celebrated every year at Puri, in Orissa, on the east coast of India. The actual rituals of Ratha Yatra start much ahead of Ratha Yatra day. Snana Yatra is held 18 days before of Ratha Yatra when Lord Jagannatha, his brother Balabhadra and his sister Devi Subhadra are given famous ceremonial bath on an open platform known as 'Snana Bedi'. Snana Yatra day is Jyeshtha month Purnima Tithi or the day of Jyestha Purnima. Then for 15 days they remain in isolation, called the period of 'Anabasara'. No public worship is performed for these days. After 15 days, the Gods come out of the temple in a colourful procession in their Chariots which begins the journey known as "Ratha Jatra'. The deities Sri Mandira, Lord Jagannatha, Lord Balabhadra and Goddess Subhadra, with the celestial wheel Sudarshana are taken out from the temple in big ritual procession to their respective chariots. The huge, colourfully decorated chariots, are drawn by thousands of devotees on the bada danda, the grand avenue to the Gundicha temple, some two miles away. On their return from the Gundicha Temple, the three deities stop for a while near the Mausi Maa Temple (Aunt's abode) and have an offering of the Poda Pitha, believed to be the Lord's favourite. Mausi Maa temple dedicated to Goddess Ardhashini during Bahuda Yatra. After seven days stay, the deities return to their abode in Srimandira. Lord Jagannatha returns to Jagannath Puri Temple after taking rest for eight days in Gundicha temple. The day of return yatra or Ulta Rath Yatra is known as Bahuda and is observed on the ninth day after Ratha Yatra on Dashami Tithi. The Return Journey of the chariots takes place in the same order as in the Ratha Jatra. Balabhadra's chariot moves first, followed by those of Subhadra and Jagannath. The chariots, pulled by thousands of devotees, reach back the Singhadwara in the late afternoon of the Bahuda day. Bada Ekadasi on the next day, the three deities are attired in beautiful costumes and wear glittering gold ornaments and it's known as the 'Suna Vesha'. The three deities go back to their original place of the temple, the 'Ratna Simhasana', in the Pahandi style on the dwadasi day. Now Jagannath Puri Rath Yatra goes into completion. Their arrival into the Puri Jagannath marks the end of the Ratha Jatra festival at Puri.


Rath Yatra at Puri gets 1 Million Pilgrims every year

On Earth, Ratha Jatra, a symbol of equality and integration, is the magnificient festival full of spectacle, drama and colour. The world famous, Puri Rath Yatra attracts more then one million pilgrims every year, from India and also from various parts of the world. Rath Yatra or Chariot Festival is the only day when devotees who are not permitted into the temple can get a chance to see the deities. The Rath Yatra festival at Puri start with the invoking ceremony in the morning and the chariot pulling on the roads of Puri in afternoon. The 3 deities have 3 different chariots - the chariot of Lord Jagannath, Nandighosa, has 18 wheels and is 45.6 feet high, the chariot of Lord Balabhadra, Taladhwaja has 16 wheels and is 45 feet high and the chariot of Subhadra, Devadalana has 14 wheels and is 44.6 ft high. The wooden temples like chariots are constructed a fresh every year and idols of all three deities are also made of wood which are replaced by new ones every 12 years.

Ratha Yatra is also known as Gundicha Jatra, Ghosa Jatra, Navadina Jatra, Dasavatara Jatra and a few other names. In the words "Rath Yatra", rath means the Chariot and Yatra means travel or journey.There is a Sanskrit proverb "Rathe tu vamanam drishtwa punarjanmam na vidyate" which means a glimpse of the Vamana, the small form, an incarnation of Lord Jagannatha, is sure to ensure moksha that is release from the cycle of birth and death.

Rath Jatra is an occassion of the celebration of supreme divinity who has manifested himself in the Kali Yuga to emancipate humanity and to relieve them from their sufferings. Lord Jagannatha is Vishnu or Krishna. A glimpse of Lord Jagannatha on the chariot is truly auspicious one. It is said that even a touch of the chariot or even the ropes with which the chariots are pulled is considered enough to confer the results of several pious deeds or penance for ages. The chariot, the wheels, the grand avenue all become one with Lord Jagannatha himself.


Kathopanishada mentions the concept of the chariot in these words-

which means the body is the Chariot and the soul is the God himself in the chariot. The wisdom is the charioteer to control the mind and thoughts.

For devotees, it is considered the most auspicious occasion  when they are able to see the deities of the Srimandira in the Gundicha Temple, the final destination of the procession of the chariots, derive the benefits of a thousand horse sacrifices, an extremely pious deed.

Lord Jagannatha after Bahuda or Ulta Rath Yatra returns to his main dham or Jagannath Puri Temple just before Devshayani Ekadashi when Lord Jagannatha goes to sleep for four months. Among people of foreign origin who visit the famous Jagannath Temple in Orissa, Ratha Yatra is also known as Puri Car Festival.


Are there two rath yatras and what's there connection?

Dwarka in Gujarat where Krishna's half-cremated body is believed to have been immersed into the ocean is located on the west coast of India and Puri in Orissa- where it is said to have re-emerged as a log - is located in the east. About several hundred years ago, a Hindu saint and priest of a Hanuman temple in Gujarat, Shree Sarangdasji, arrived in Puri to offer prayers at the Jagannathan temple. While sleeping at the temple guest house, he was informed by Lord Jagannathan himself to go back to Ahmedabad in Gujarat and install three idols of Jagannathan, Balbhadra and Subhadra there. After installing the 3 idols there, Ahmedabad Jagannathan Temple was founded.


What happens to the chariots and elephants after the Rath Yatra is completed?

After the Rath Yatra festival in Puri is completed, the chariots are dismantled and their wood is used as fuel in the temple kitchens - believed to be the largest in the world that cook 56 types of dishes every day and feeds anywhere between 2,000 to nearly 200,000 people. Elephants are  returned to the forests or the place from where they were picked up.

In 2020, as there is a lockdown in India and because of Corona crisis, it is expected that very few people will be allowed for the Jagannath Rath Yatra 2020.