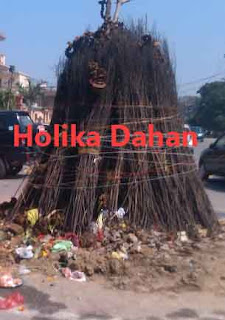 Holika Dahan is one of the Hindu religious rituals while celebration of the holi festival. Holika Dahan is celebrated after the death of Holika and protection of Prahlad. Holika Dahan is always held at evening or night time as per the Hindu calendar. Hindu people roast the “Jau” in the Holika fire and bring them to their homes for the goodness and well being of the family members. Also are burnt 5 “Upali” in the fire denoting that as burning all their problems.

Holika was given a boon by Lord Brahma that she would never be harmed by fire. There was a time when Holika sat on a bonfire with Prahlad on the orders of her brother and Prahlad's father "Hiranyakashipu" so that Prahlad gets killed but instead as Prahlad was a great devotee of Lord Vishnu, the fire did no harm to him and Holika was burnt alive.

Purnima Tithi Begins - 03:27 AM on Mar 28, 2021
Purnima Tithi Ends - 12:17 AM on Mar 29, 2021
Holika Dahan, also known as Holika Deepak or Chhoti Holi, should be done at the time of Pradosh Kaal (which starts after sunset) while Purnimasi Tithi is still prevailing. All good work should be avoided when Bhadra prevails.

Holika Dahan Muhurta comes on the basis of following:

Holika Dahan or Holi bonfire is followed by Holi/Dhulandi day when people play with colors. We at www.Durganavratri.in wishes all a happy and colorful Holi.


A great story of Hindu mythology revolves around the celebration of Holi festival as well as burning Holika as Holika Dahan. The story of Holika and Prahlad and subsequent Holika Dahan indicates that good always wins over the evil. Hiranyakashipu was a demon King and father of Prahlad (who was a staunch Vishnu devotee). Holika was Hiranyakashipu's sister.

Hiranyakshyap always wanted to be alive always and nobody could ever be able to harm him. In order to achieve this dream, he did a tapasya of Lord Brahma. One day, Lord Brahma was pleased and Hiranyakshyap was granted a boon by Brahma that made him think he was eternal and the most powerful man on earth. Lord Brahma could not grant him a boon that he would not die as death is the ultimate truth that comes to everybody.

Hiranyakshyap thought that if death has to come for everybody, he was able to persuade Brahma for boons which would made him immportal and nobody could kill him. Thus he started thinking that he himself was the God. He wanted all people to worship him as God. He started killing people did not accepted his orders, also killed many people including saints and rishis who refused to accept him as God. His son, Prahlad also did not accepted his father as God. Prahlad was a true worshipper of Lord Vishnu and saw Vishnu present in everything whether it was alive or materialistic. Hiranyakshyap got very angry with his son Prahlad and tried many ways to kill him. He was failed in a lot of attempts as Lord Vishnu always saved Prahlad when Hiranyakshyap gave him troubles. Then on one day, he called upon his sister Holika to help him. Holika had a boon by Lord Brahma that she would never be harmed by fire nor she could be burnt. Hiranyakshyap ordered Holika to sit on a fire with Prahlad so that Prahlad could be killed. But destiny had some else in store for them as because of ill mindset and the wrongdoings of Holika, she was burnt alive and Prahlad was saved by Lord Vishnu.

Later one day, Hiranyakashipu became very angry with Prahlad again when his son was worshipping Lord Vishnu and told him that the Vishnu is present everywhere and he could see him everywhere. Hiranyakashipu tied his son to a pillar and said that call here Vishnu to save you-he wants to see if Vishnu comes or not to save Prahlad. Prahlad said that Vishnu exists in everything, even in the pillar he has been tied. Upon hearing this he tried to demolish the pillar and in that way, he hit upon the pillar. As he was on his way to hit the pillar hard, Lord Vishnu came out of the pillar in the form of Narasimha (above half lion and other half human) in front of him, saved Prahlad and run towards Hiranyakshyap. Lord Narasimha caught hold of Hiranyakashipu at a doorstep and killed him by his big and sharp nails. Hiranyakashipu died at the time when it was dusk (means neither day nor night), doorstep (means neither inside the door nor outside the door), lap (means neither land nor water and air), killed by lion claws (means neither Astra nor Shastra) and Narasimha (means neither human being nor animal). So, Hiranyakashipu was killed that way as the boon by Brahma. Thus, Prahlad was saved by Vishnu god. This is a great real life story and Hindu mythology which indicates that, truth and good always wins over the false and evil.

Holika Dahan is celebrated by burning Pootana or Putana instead of Holika in some places of India. It revolves around the story of demon king Kansa, Putana and Lord Krishna. Kansa sent Putana to kill Krishna. Also a demon, Putana tried to kill Krishna with her poisonous breast milk. She started feeding baby Krishna of her poisonous milk. Baby Krishna in an attempt to kill the demon Putana, started sucking forcefully and she came in her original form. Finally Putana died and baby Krishna was saved but got dark blue skin color. From then onwards, people started celebrating Phagwah by burning Putana. On Holi celebration day, Krishna and Radha played holi by coloring each other's face's. Since then, people play holi every year by using colors.


On the day of Holika Dahan, married women perform a ritual wherein they prepare a puja thali for worshipping Holika which contains Roli, Haldi, Wheat flour, 5 co-dung uple having hole, mauli (red thread), Jal and 5 or 7 jau bali. Women offer this puja to Holika for the well being and good future of their family. Often, women can be seen doing rounds of the Holika heap on the crossroads in the nearby regions. They offer water to Holika while making rounds for 5 or 7 times. A red thread is offered to the Holika in its diameter while making round for 5, 7 or 11 times . It is believed that offering haldi powder, wheat flour powder, jau bali and co-dung uple to the Holika will bring well being and long life of their kids. Women seek blessings from Holika for the prosperity and health for the whole year for their families.