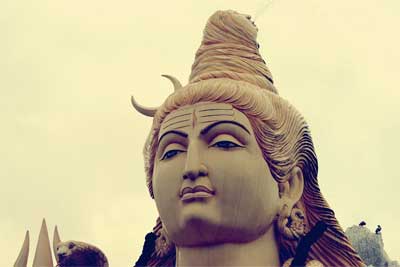 Pradosh Vrat is the time when Lord Shiva and Goddess Parvati will be in their most pleasant time and it is regarded as one of the fruitful and best time to worship them. Pradosh Vrat, known as Pradosham or Pradosham Vratam in South India, is observed to seek blessings of Lord Shiva. Pradosh Vrat comes 2 times a Hindu calendar month. Pradosh is observed on both Trayodashi Tithis, i.e. Shukla Paksha Trayodashi and Krishna Paksha Trayodashi. Every day also has a Pradosh Kaal which comes mostly in the evenings time. If Pradosham day comes on Monday it is known as Soma Pradosham or Chandra Pradosham, if it comes on Tuesday it is called Bhauma Pradosham and if the Pradosh date comes on Saturday it is known as Shani Pradosham.

"Pra" means remover and "Dosha" means sins, Pradosh literally means removal of sins. Another meaningof Pradosh is the dusk time also known as the Godhuli...a time period of around 3hours, divided into 1.5hrs before the sunset and 1.5hrs after sunset....this time is known as the Pradosh Kaal.

Shiva Purana states, Pradosh Vrat is believed to be the most beneficial fast to get health, wealth, and children. The Pradosh Vrat frees the devotees from all the sins committed whether in the past or present. It is believed that Shiva with Goddess Parvati perform a Holy Dance on Mount Kailash in a pleasant mood during the Pradosh Kaal and thus offering puja at this time helps to get removal of sins and fulfilment of wishes. You can perform puja in your home by lighting a diya or at a nearby Shiva temple. Fast on the Pradosh not only give the worshipper all the worldly pleasures but also get moksha.

As per Shiv Chalisa, significance or importance of Pradosh(Trayodashi Vrat) is clearly told:
"Trayodashi vrat kare hamesha, Tan naahi raakhe rahe kalesha."
which means if you fast on the day of Pradosh, there will be no disease and no complications in the body.

It is believed that if you worship Uma-Shankar or chant Shiva mantras during the Pradosh kaal, you will be free from all the sins of your life and all your wishes would be granted.

The day of Pradosh as well as the Pradosh Kaal time that comes on each day is regarded as the best time to worship Lord Shiva and Parvati as they both are in their best mood. It is said that when demons were fighting with Gods, the Gods approached Lord Shiva on the thirteenth day of the lunar fortnight i.e the the day of Pradosh. That was the time when Shiva and Parvati was in their best mood and helped Gods by giving their wish.

Pradosh Katha/Pradosham Story
One story also says that Lord Shiva drank the Halahala poison while churing of the ocean during samudra mandhan, Maa Parvati kept her hand on Bholenath's neck so that the poison could not enter his body. Thereafter, Shiva's throat became blue and thus he came to be known as Neelkantha. After amrit was taken up by the Devas, they enjoyed drinking amrit and in return they forgot to thank Lord Shiva. But on the 13th day that is on Pradosh day, they realized their mistake and went to Shiva for mercy. Shiva forgave them and that time is believed to be the Pradosham. Thus, anyone who prays to Shiva and Parvati during Pradosh Kaal gets his/her wishes fulfilled and also get moksha or salvation. It is believed that praying to Lord Shiva at this time of Pradosh will take up all the sins of their life and give moksha. Reading Shiva books and scriptures as well as chanting Shiv-Parvati matras during Pradosh Vrat is the best thing that we can do. Even an offering of Bael or Bilva leaf to Shiva or Shivlingam is good enough for relieving from all sins of our life.


Note: Pradosham fasting day is different for two cities even if those cities are located in the same Indian state. Pradosham Fasting is based on sunset time and it occurs when Trayodashi Tithi prevails after sunset. Thus Pradosham fasting could be observed on Dwadashi Tithi i.e. one day before Trayodashi Tithi. As Sunset time is different for all cities, Pradosham days and timings might be different. Shiva Puja's auspicious time is on Trayodashi Tithi and after Sunset during Pradosh kaal. www.Durganavratri.in has mentioned all Pradosham dates and times for 2019 and 2020. Currently, we have mentioned the timings for Delhi/NCT. For other states, it can be some minutes difference of starting and ending Pradosh Kaal. These Pradosh timings mentioned can be the preferred time for performing Shiva Puja.