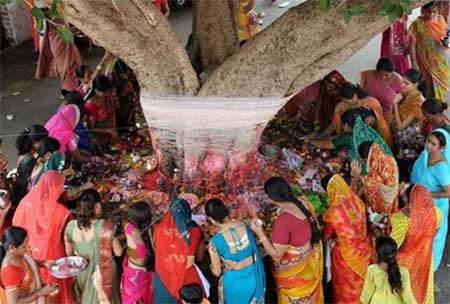 The significance of the Vat Savitri Vrat is mentioned in great scriptures and Puranas like Skanda Purana, Bhavishyottara Purana, Mahabharata, etc. Vat Savitri Puja is observed by married Hindu women for the well-being, prosperity and longevity of their husbands. Vat Savitri vrat reminds us of the deep devotion and fierce determination shown by Savitri to win back her husband Satyavan from God of Death - Yama. Banyan tree's root represents Lord Brahma, the trunk represents Lord Vishnu and branches and leaves are Lord Shiva. The Vat tree stands for Trimurtis and those who worship banyan tree are blessed with good fortune. Thus it is believed that the worshipper gets the blessings of all the three gods and grant the wishes for a happy and long life with their husbands. Vat Savitri Vrat fasting starts on the trayodashi day of Jyeshtha month and ends on the Purnima. The fast is then broken on the fourth day. However, many women now observe the vat savitri fasting only on the purnima day.

Married women get up early in the morning of Trayodashi day, wears new clothes, new bangles and apply bindi and vermilion (sindoor) on forehead and offer prayers to Banyan Tree or Vat Vriksha. Women eat fruits on the day of the fast. Women offer water, Akshat, Abil, Dhoop, Deep, Kumkum, flowers, fruits, Ganga jal to the Banyan Tree, after that a red or yellow coloured cotton thread is tied around the tree. After that they perform 108 parikrama around the tree. They wish for a happy long life with their husbands and offer prayers to Savitri as well as Vat tree. The story of Savitri and Satyavan is read which is also called Vat Savitri Vrat Katha. Savitri is worshipped as the Goddess of the day and Vat vriksha puja is performed. The fast is completed after offering water to the moon as well as prayers to the great Savitri. The women toucn the feet of their husbands and elder people in the home. Food, clothes and money are distributed to the needy and the poor.

Vat Savitri vrat is being observed by married Hindu women to honour Savitri, the great wife of Satyavan who rescued his soul from Yama, god of death. This is how it goes the story of Savitri and Satyavan. Follow below is the Vat Savitri Vrat Katha:King Ashvapati who was the ruler of Madra Kingdom, and his queen, were childless, once organised a puja in honour of Sun God Savitr on a sage’s advice. After the Sun god was pleased with their devotion, he blessed them with a girl child, who was named Savitri in respect of the Sun god. Savitri led an ascetic life inspite of tha fact that her father was a king. The king asked Savitri to search for a husband for herself as he was not able to find the perfect match for her daughter. Savitri met the son of the exiled blind King Dyumatsena, Satyavan and decided to marry him. As Sabitri informed of her decision to marry Satyawan to her father, Narad Muni came upon and said that Satyavan would die within a year and thus would not be granted with life on earth after that period.

Savitri was persuaded by her father but to no avail. King Asvapati finally agreed to his daughter’s wish. Satyavan and Savitri got married and moved to the forest with her husband where Satyawan lived with his parents. She gave up her richness and royalty to match with her husband’s life and chose to live like a ascetic.

Three days before the completion of an year, Savitri started fasting and then followed her husband to the forest. On the day when Satyawan was bout to die, Satyavan, fell off a banyan tree while he was chopping wood. Yama, the lord of death, came to take Satyavan’s soul. Sabitri kept following Lord Yama and refused to go. She followed Yama for three day and nights, after which Yama relented and asked Savitri for wishes except Satyavan’s life. Savitri asked to restore her father-in-laws’ kingdom and his eyesight as the two wishes and that was granted by Yama. Since Savitri kept following Yama, he asked for a boon again. The last wish Savitri asked for was children with Satyavan, he again granted it. But since Satyavan had died, how it could be possible which puzzled Yama. He saw Savitri's sincere devotion and utmost dedication for her husband. Thus, Yama god was impressed and bestowed her husband Satyavan’s life. Satyavan gave up his life under the Banyan tree and again was granted his life under the same banyan tree. Since that was the day, Vat Savitri Vrat is being celebrated and observed by thousands of married Hindu women for the long life of their husbands. Savitri came to be known as "Sati Savitri".